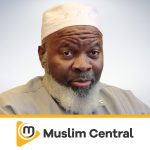 changing the society whether you want to make hedra that is absolutely your choice. The Prophet Alayhi salat wa salam sent more ads to Yemen, for econ our limitado illa. Allah Allah hasten to give Dawa. I do think that is my personal opinion, that is wrong being here, just living your life and not given our I just think that it's inherently

wrong and misguided. I think that we have to share our faith and the part of us being here. Why are we here if we're not sharing the faith? why we're here just to just to live a good life. So if you say if you ask another question, is it mandatory to make a joke? I don't think it's mandatory. If there are some Shaykh is gonna get fat while they say that all of us, every Muslim, and every non Muslim country has to make migration. The question is, what are we going to make migration to?

Where we gonna go? Who's going to take all of the Muslims in the West? Where are we going to take them? So your choice, your personal choice, I know, Muslims who made migration to different parts of the world.

the difficulties that we face in the Muslim countries