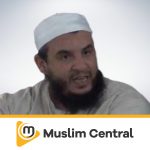 Series: Zoubir Bouchikhi – How To Deal With Death

Sheikh Zoubir Bouchikhi talks about death, funerals and how Muslims should deal with it – part 5/6