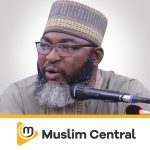 one minute you want to talk Allah Ali Assalamu alaikum warahmatullah wabarakatuh My name is Abdul Fattah de me. I want to sincerely welcome you all to how TV Habibi Ramadan. And we are on to the segment that is a special one called Ramadan love. As we move on on this segment of the program, we shall be looking at issues that surround the essence of fasting in the month of Ramadan, and the list lessons and the teachings of the Glorious Quran. And the Hadith of the Prophet sallallahu Sallam was the gas to the spiritual development that we enjoy. When we first in the month of Ramadan. Ramadan is the month of love, the month of mercy, the month of blessings, and the month of

grace and the month where Allah forgives, is a month where Allah emancipate people from fire, to show them his love, and put them into his mercy. Ramadan is the name of a month. It's also a pillar of Islam, or the five pillars of Islam. We have the Shahada, that's to be a witness that has no deity worthy of worship except Allah, and that Muhammad is the Messenger of Allah. After that, we have ecomo salaat. That is to establish five daily prayers. And we also have ether is a cat given the cat to the poor, and we have fast in the month of Ramadan as the fourth pillar of Islam, after which we have going on Hajj going on pilgrimage for those who are able to do so. Ramadan being a

pillar of Islam is compulsory for all believing male and female, that is a resident that is mature, that is seen and that is capable of fasting the month of Ramadan. However, look at this aspect of the love that we have in the month of Ramadan. Almighty Allah has chosen to use a special name to describe those who should fast in the month of Ramadan. Allah says I would be lying in the shade on Rajiv. Yeah, are you a Latina Armando kuchibhotla como si la. cama kuchibhotla la Vina Min cabela comme la la quinta Taku, Allah has chosen to use a very beautiful way in describing those who should first and that is, oh, you will believe Buddha to love it that you are amongst those who believe

that Allah is referring to those who have faith in Him, those who trust in His judgment, those who trust in His justice, and those who rely on his mercy. Those who believe those who believe and they know very well, that Allah has instituted this fasting, as a way of showing mercy and blessing on to them. And the Prophet sallahu wa sallam described the believers. And when the Prophet said, none of you is truly a believer. Life, meanwhile had to come have a Bala he may you should believe enough. See, none of us truly believe up until he loves for his brother, what we lost for himself. So a true believer is somebody who loves others, and would love Almighty Allah subhanho wa Taala. So the month