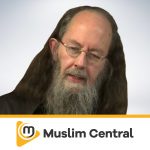 No more conflict with the Islamic law. What will our stance be as true Muslims? Please clarify in the context of the 2000 Act of Parliament.

I hope you don't expect me to be familiar with the 2000 Act of Parliament.

So therefore, if there's any any laws

that are passed that violate the Sharia, in particular, those laws

that are preventing us from doing what we are supposed to do as a Muslim, then obviously we do not obey them.

And we find any means that we can to avoid avoid, again.

If there's any law, for example, that restrict us concerning something that is permissible for us in our shootout, then it might be a different issue, in the sense that if we can avoid it easily, if we can avoid it easily, then we avoided and so therefore, we don't get us selves in any trouble here. And the Sharia is neutral with respect to that. But in that, in essence, the basic point is, if there's any law required asking any Muslim to do something, which goes against the Sharia, then he does not obey that law

So therefore, any we as Muslims, even, we're not able to implement all of these things, because of the fact that we don't have the Islamic State. However, at the same time, we should try to implement all of them, and support all of them and stand for all of them that we can, given the situation that we are facing. So in other words, just because we don't have the Islamic State in which the whole Sharia is being implemented, we are doing we do our best to implement as much of the Sharia as we can, as ourselves in our communities. And we do our best to try to support any further implementation of the Shia, given the powers of the stream that we have.

Just someone just asking about any good books on this topic, human rights in Islam.

There are there are some books, some I would not recommend.

There are a couple of books one is by appeal, forget.

It's, it's, it's more of a book that discusses the western concept of human rights, and then discusses the Islamic concept, and then discusses the number of the rights within Islam, and then answers those objections to the Islamic law and the implementation of Islamic law. And that's why I've been laughing, but i don't i think i think the name of the book is called human rights in Islam. It has been published before and there's a new edition coming out, inshallah. It's both in English and Arabic. There's a new edition coming out by the Institute

in Virginia, the Institute of Islamic and Arabic studies in America.

I only take questions that are related to the topic on the topic. Okay. Can you highlight

Yes, but the question here says that Western thought is often presented as international laws. Well, the problem is

that they have been able to convince

the other countries of the world to pass these laws.

You know, for example, the the declaration in 1948. Now granted, a number of Muslim countries that exist now weren't even countries at that time, like Algeria and others, and many of the others were newly independent.

And in many times the the rulers were basically just replacing the colonials they were the same as the colonials, but they were now from the local local area. So they sign those declarations. Now, actually, the way

In 1948, there was a difference of opinion about what was the legal effect. As soon as the Soviet Union signed it, they said, Well, actually, these are all just recommendations anyway. And they're not law.

So the the the one that was ratified the two that were ratified in 1966, and went into law in the 1976. These, again, they're presented mostly from the west, but the other people signed. Now not all the countries have signed the Declaration of civil and political rights and the other one of 1966. Those countries who have not signed it, they cannot be held responsible for but to date, I think something like 140 countries have have signed it. So the problem is not, they're not saying this is Western thought, let's make it international law and force everyone to accept it. But they're taking their Western thought and presenting it in international bodies, and the people are signing it. And

once they sign it, then it becomes international law.

Okay, this question, say, Why is there a constant attack on the Taliban about, about them violating human rights? Are the Taliban following the Quran and Sunnah?

Like, I mean, if you just heard the lecture on human rights,

so you have an idea what perspective they're coming from, you know, you draw you you destroy an idol, violating human rights.

You say the Quran says that the woman has to wear hijab violating human rights. Okay, so that's why they're coming from a perspective, that you have human rights, and all religions, and all laws have to be subjugated to it. And of course, Afghanistan has signed those earlier declarations. So they have them kind of, in a sense, because they don't recognize the fact that if you change the government, and then you say, well, we change the government and our religion says this, they don't recognize it as not a valid argument and in

an international law. So I mean, why they're constantly attacking them is always the same for the Sudan. And why are they boycotting them? Why are they putting so much restrictions on them? It's obvious, because they are applying Islam Islam violates what they consider human rights. And as we said, they're actually human rights are not based on anything really, about the the total aspect of the Taliban and how much they're playing. I don't have probably enough information about them, I have not really studied them in great detail to answer that question.

Is it permissible or advisable for Muslims to seek to establish the Sharia by means of democracy, ie participation in elections as an Islamic party? If not, what are the alternatives?

Well, I'll be I'll be kind of very blunt on

it's not going to work.

It's not going to work because

You know, the Muslims could win an election, you know, 99.9%, you know, just like the Egyptian President every time and, and, you know, the next day, all of a sudden, there's a military takeover. Gee, how did that happen? What a surprise, you know, don't really expect too much. But the problem is that what really what we really need is the masses, the Muslim masses as a whole and he needs to develop their Islam needs to develop their faith. So that any a group or small group of them or any any kind of outside influence cannot just come in and destroy what they have established. Because the Muslims are strong, they will stand up for the [???]tier and even if people for example, wanted

to make Riba halal, even if people wanted to distribute pornography or whatever, the Muslims themselves would not stand up for it, they will not accept every Muslim society you see now the Muslims himself are accepting it you know, even if they call it an Islamic State, and even if Muslims have taken some form of power when these evil forces come in and spread these things, the Muslims you know, not all of them obviously, but the Muslims accepted and that is our basic problem right now. Until we change that and we're not willing to accept anything except what Islam permits, then inshallah we'll be implementing the Sharia and not bowing down to any other force or power.

Okay, hey, um, brothers and sisters, we will have to end the question session there. Can you please keep student because there's some important announcements to be made. Just keep keep facilities