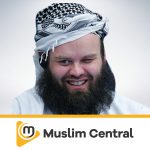 A short naseeha piece offered by Abdulmalik Clare (Formerly known as Jerome Clare) a dynamic Da’ee who was the first completely blind person ever accepted into professional wrestling.

I will humanize showing upon your logy a fella Mia zero fill out only for takuna Allahu Allah we are up in hoonah we have our the we scenario NaVi ha, for in

salt saw what I can turn on Hulu, TV pseudo.

Someone told me a kid or teacher said, you know, you're you can't do that you're blind. And I didn't know what blind was. So when I went home, I asked my mom, so what's blind? And she said, he said, You You're not blind, you just can't see.

When I took my Shahada, and I was I was hearing the colon

heard the ayah. And I'm like, that's what that kind of solidified it as heck for me, right? Because a lot of said that literally said, you know, it's not your eyes that can't see but it's the hearts that are what, what, what? actually grow blind. Right? So that's what I kind of meant when I said blind, to be blind is to be kind of disabled. And I didn't mean it from the eyes since I meant it from the heart sense. Right? That that's actually what the ayah means is like someone Bookman learning formula yapilan, those people they are deaf, dumb and blind, and they don't have any intelligence, right? Doesn't mean that they can hear and can see literally, but their hearts are

So they don't hear or see because of the seal that's on their hearts. A lot of people that fail to understand what Islam is, some of them are Muslims claiming to be and some of them are not.

But you can you can be discouraged. You say something doesn't necessarily mean live up to it. You can be just as blind as anybody else. The king has a friend, this friend was blind, completely blind.

came to this Milan. Zola, Harry said, I'll give you all my wealth, all of it if you heal my eyes.

So of course Allah healed that friend of the kings eyes and he became Muslim. There's many Heidi's that are that are like that there's one. The person who has taken his two beloved ones from him, meaning his eyes and his patient with it. His promise Jana. There's a lot of stuff. It's empowering. When you think of it right. It's empowering because we're taught with a fiber to Kumasi, button COVID-19 La, La La Jolla, like when a calamity comes to you or trial comes to you. And you say from Allah, we came into a lot of return again. And will I call him Swati Metalab became more than those people have special mercy from their Lord, what like almost anyone, and they are the people who are

guided. And so it's important to empower yourself with that. Because really, I mean, you're never powerless ever.

If, if nothing else works, you can still make dos silently, right? As long as you can think and your your heart is alive you can make. So you never actually power it. And that's, that's the message that try to get people's empowerment, you know, you can never say that the Muslims are powerless, silly, you know,

you can talk to a lot who, who's better than a lot to talk to me. So you call your MP congressman and this man and not one and not one in 31. And they they may or may not help you. But I'll always listen to you

for miserable for the owner of a restaurant, for those who are not fascinated during the day in Ramadan. Now many people would look and say that, why didn't the law protect them?

Why is it that a law didn't protect those people? That's many people will look at that and say that many of us would say that.

That was their choice, either you be burned to death in that fire or you give up your religion, not one of them. Not one gave up his or her religion. atonia genome in general Kava right. The dunya is a prison for the believer and a paradise for the disbeliever when we're taught we're taught on our spiritual slab you know what I will put up a line, a ladder come to one like Be patient and steadfast and have have Taqwa for a lot that you might be successful like there's there's no end

not like it's not just people people get that twisted when

we think that, you know, Quran is just kind of a book where we read it in a nice voice and we've decided to normal bond, but it's the column of a lot like it's literal speech of Allah. So who better to encourage you then, you know, in the last panel tolerate anything I mean, not being able to see in a wheelchair poverty, whatever your issue happens to me who is better at encouragement and a lot I mean, we can we can remind you but the sources is from Allah subhana wa tada in a victory, meaning remembrance reminder, actually reminder benefits the believers.

inilah Vina Anwar Ali heart. Those who believe and do righteousness. The whom genuine tragedy mentality Helen Harlan. That's the proof that I'm using a lot of promise those people that paradise and Gardens under which rivers flow. And this is the important part of the ayah. When we say Valley Cal foes will Kabir.

That is the tremendous victory. There is no victory besides that victory.

How it looks doesn't matter. Who cares that people may see them as being defeated. They weren't defeated.

It only looks that way. They were not defeated. I'm sorry. No one in Genoa is defeated. Nobody, absolutely nobody.

They made it into the paradise of Allah subhanho wa Taala and they had to go through fire to get there.

are clear Allah Walter our soul, obey Allah and obey His Messenger.