About The Baba Ali Show 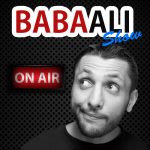 Comedian Baba Ali has put on his podcast headphones and microphone to take on taboo subjects in the Muslim community. From time to time, he brings on his unique guests to tackle the issues that we often think about but rarely talk about. The podcast launched on 23rd Jan 2015, with new episodes released weekly. If you enjoy the series, please subscribe via iTunes or through your podcast app on your phone.