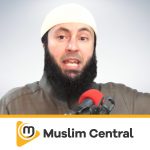 A time for us to reflect and change so that we always become better and better as we listen to him Japan Allah tada just want to explain inshallah very quickly what we're going to be doing in Sharla 10 minutes everyday inshallah no more than that reminders. So we'll do one day we'll be doing a hadith. That is really a story that the Prophet sallallahu wasallam had told us, the other day we'll do an A, A, A reflections on one area, from the Koran and its relevance to our life in sha Allah. So today by the will of Allah so we're going to do like, story one day and I have the other day story one day I on the day, except Wednesdays where it was going to be longer 630 to seven so it's not 10

minutes on Wednesday. That's based on some requests that we will do something a little bit longer. So we will deal with different topic every week, inshallah as many Wednesdays as it will happen, Ramadan and Allah enables us. So the story for today we're going to start with a story in sha Allah. This is a story that the Prophet sallallahu wasallam told. And the title of the story is the elderly woman of the Israelite elderly woman. This is important in a mustard doc. It's authentic. So here's what the story it says the prophets a lot of SLM once was hosted by an Arabi a bedwin.

This bedwin honored the Prophet sallallahu Sallam gave him they just gave him that so the Prophet as it was his habit, he wanted to reciprocate, wanted to reward that Arabi that better one. So he says whenever you are in Medina come and we will reward you host you. So they are RB Yeah, came to Medina. After a while the Prophet recognized him. So he honored him. He hosted him but he also asked him, he says, Do you want anything? Like asked me?

So that Arabi saw as an opportunity to ask and he said, I want a camel with its saddle. I want some goats so my families can milk and they can drink from

the Prophet sallallahu wasallam said, Is this it?

Can't you be like the elderly woman of Venezuela he.

So the companions as to who is this elderly woman have been selected.

Salam before his death, he was here before his death, he made us meaning our ancestors promised that if you want to leave Egypt, you have to take my body out with you to be buried in Palestine. So we don't know where his body is, and that is why we cannot leave because we our fathers made a promise before and we cannot head out. We cannot leave we can find a way. So Moosa said well, who knows where his use of buried and he said, um, where is he buried so that we can fulfill the promise, take him out and find our way out of Egypt? This is no one they said no one knows where he is buried except one elderly lady.

She, she knows where he is buried. So Musa alayhis salam went

And he said, Tell us where Yusuf is buried? She said no,

unless you would do me something in return. He says, What do you want? That's the question, What do you want? Ask me, what do you want? She said that I will be with you, in general, not necessarily at his level, but in Jenna, very close high up there, that would be with you in general. So Musa alayhis salam was very reluctant. He did not want to grant that. Maybe he felt that well for this, you want that? And just for this information, you want all of this? Maybe you felt that or maybe he couldn't, he didn't feel that he could grant this obviously cannot allow only can grant that. So he was reluctant. But then Allah revealed to him, give her what she asked for meaning tell her Yeah, it

is yours. So she said I'll take you so she took everybody to a small lake, body of water. She said drain the water. They drained it. He says dig here, they dug there, they found the body of use of alayhis. Salaam, they extracted the body and then they started to move and then they said the path was lit, meaning that they could see clearly how to exit Egypt, and they exited.

So the profits A lot of you sent him was telling Dr. Ravi, if you had the chance to ask me. And they said asked me I did not put a limit on it. The only thing you'd ask me for is a camel and goats. Don't you see? What?

Don't you see what that elderly woman had asked for?

So some of the benefits of this story, okay? One benefit is that when we sometimes neglect a command of Allah zojirushi a duty that we have, that may cause loss in our lives, like ben de soleil, right? So they wanted to exit. And they were doing something that pleases Allah, but something was missing. Because that thing was missing, they couldn't leave. So sometimes in life, we find ourselves lost.

And we want a way out of this loss. Let's reflect and see is it that we have neglected something that Allah loves or doing something that Allah hates that is causing this loss? If you leave these things a lot as the agenda will restore clarity, first mental clarity, but also physical clarity, so that we can exit our problems inshallah. The second thing to keep in mind is, what are our goals and our aspirations? What is it that we want to achieve? Our life? What do we want out of it? So if you were to ask that Arabi that that bedroom sitting next to the profits audience in them ask, he could only think of material physical things, my physical needs, what can I eat, what I can drink, and

maybe he's poor, and that is why he's asking for it. That's a very real possibility. But at the same time, if you had a prophet of Allah sitting right next to you, if you and I had a prophet of Allah sitting right next to us, and we were granted that opportunity to ask for anything, would we ask for Jenna and say, give me Jenna, but not only Jenna, give me but the highest level in general. So the Prophet sallallahu alayhi wa sallam, if you know the Hadith, he said, when you ask Allah for gender, ask him for what? alpha dose. This is the highest of gender, and it's underneath directly underneath the throne of Allah, meaning that there is nothing higher. So that here all prophets Allah Islam is

so much. What am I going to buy? Are we only worried about this physical part of Ramadan? Or am I also interested in a less forgiveness? Ramadan is a little hard but I have to keep in mind that a lot of Allah's forgiveness comes with that, that allow it takes away my sins, the hotter Ramadan is. Yes, Ramadan could be challenging but can't I ask Allah as origin? Yeah, Allah, Grant me success, Grant me power, aid and strength so that I can continue to worship you. If you want something from Allah.

This is a time to ask him just like it was time to ask the prophets a lot he was in them when he was alive. This is the time to ask him subhana wa tada what is it that you want and asked for the best. Ask for Allah forgiveness. As for Allah to grant you knowledge and make you a learned person, as for Allah to give you taqwa. As for Allah azza wa jal to soften your heart to take away any anxiety, any problems that you have, and keep asking Allah for it. And not only worried be worried about what I was going to eat, what I'm going to wear, what I'm going to drink, these are externals, these are things that come in, not how much money I have, or how much money I have lost, these things can be

compensated, the only thing that we cannot compensate that if we miss this world and exit without a loss pleasure. So that, let's be like that. wisewoman have been to Israel and imagine the Prophet sallallahu alayhi wa sallam telling you and me, can't you be like that elderly lady or venues that are in when you want to ask when you want to live, as for the best and lift seeking the best. And if that is your intention, the Prophet sallallahu wasallam said the one who wants martyrdom, Shahada and seeks it sincerely inside his heart, Allah will grant him that degree if he if he or she die on their bed. Even if they did he or she die naturally but they really seek that here. with all

sincerity, Allah will grant it to them even if they die in bed. So your intention matters. So let's our intention be the best that it can be We ask Allah as though agenda because this is 10 minutes for today in sha Allah plus ask law as origin, that he will forgive us in this Ramadan, that he will make this Ramadan despite whatever we are going through the best Ramadan that we have experienced. We ask Allah azza wa jal that he makes us as we exit Ramadan better than the people who have entered this Ramadan better intention and better in worship, and better in serenity and peace. We ask Allah azza wa jal to lift any hardship that we and our families or the entire oma is facing, and that

Allah as origin will replace this hardship with ease, and the place discontent with content and replace sorrow with happiness, and that he will give us the greatest happiness when we meet him. subhanho wa Taala in Jenna, whereas Allah has to really give us sincere hearts and to allow us to cleanse these hearts so that we are always happy no matter what happens. We're always happy because we know that Allah azza wa jal is right there beside us and allies origin who created us will never abandon us you have so Allah don't don't abandon us and allow us always to be close to you. Does that come low here for listening tomorrow in sha Allah at the same time 630 in sha Allah will have