Verily Allah does not look to your bodies nor to your faces but He looks to your hearts," and he pointed towards the heart with his fingers 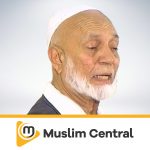