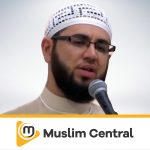 Ladies and gentlemen, welcome. We're having a discussion here with Hasib newer one of our latest additions to the institute roster. One of the things that we're themes that we're going to be discussing is some lessons that we can derive from the leadership of Sonic companions after the death of the Prophet Mohammed. Right. So one of the most common ones that we are familiar with, is a bucket. And so I know we were discussing before, and you were talking about how one of the common themes in leadership of other buckets is the theme of unity. Why don't you kind of elaborate on that? Well, one of the most powerful things and let's have a look at all the lion who is as

everybody knows, he was the closest person to the Prophet. So I said, I'm after his own family. And we could have spent his living days and nights with the Prophet. So I said, I'm all the way from Mecca to Medina. Yeah, to the extent that the prophets lesson would visit, I will look at twice a day every single day. I shall not be alone. I mentioned that. But a lot of people don't realize twice a day every day just like as a just normal. Yeah, he would come visit these. Exactly. When he migrated. I just said the Prophet came to us and a time he never would come. Okay. He came at a time when the sun when the sun was very hot. It was like,

yeah, so that's why she said the Prophet used to visit us in the morning and in the evening. Oh, for those of you who don't understand that concept, unless you've lived in the south.

Oh, my God, you can feel the intensity of the sun at noontime. That's why I mean, even in Malaysia, like, it's like, at noon time, it is it's hard to go outside. Yes, basically, it was that hot that the promises and came to visit a walk along the line, to give him the announcement of being his companion on his migration to Medina. So we know that about abubaker that he was the closest person to the prophecy center. But when it comes to the prophets, I said him now has passed away in the in history. Yeah. And it pretty much has traumatize the companions. And nobody knows what to do on what is there yelling, he's not gone. And the man is just in a state of shock. And everybody mentioned in

a novel way isn't isn't complete, almost trauma. Would it be fair to say that it was kind of pandemonium? Or is it more so like, Oh, my God, I can't believe this happened. It's like, Oh, my God, I can't believe this happen. And at the same time, they didn't know what to do. I was just sitting there in the in the profits mesh it in such a state of shock. He's saying this didn't happen in the first place. So it wasn't pandemonium. But it was just such a shock. People didn't know what to do. And, and the Prophet sallallahu sallam, you know, I think set that all of that up for a while, but kind of the longer to come all of the guidance, all of that time with him. All of the

companionship was not to set in motion, I will buck comes in. And he goes to the prophets, I said, and even though he has a human emotion of showing sadness, it's as if Allah wanted to save him from that trauma of actually seeing the Prophet pass away. He was with him the entire time in his life. But isn't it funny, he was not there when the Prophet actually passed away. He was visiting somebody wasn't Yeah, who was like, he was in Sun which is an area he was with his with his wife. Yeah. And then when he heard he came to write in, so it's as if Allah allowed aboubaker to be with the Prophet slice them in every moment that he ever faced in difficulty and hardship. But he saved a bucket from

seeing the Prophet slice Island in that moment when he was, you know, going on to the highest companionship. So I will look at when he comes in. It's a moment of absolute, you know, sadness, he, he's crying, and he kisses the prophets I said, in between his head and he says, You were so beautiful when you were living and you beautifully passed away as well. So we had that moment of humanity, that moment of sadness, but after that, all of that companionship just came into play, the guidance of the prophets I sent him came into play when I will walk and walks into the machine. It's almost as if a loss of panels at a position to this particular person to be that leader, which would

save the oma from collapse. Alright, so he saved them below as the consequences of okay him not having to experience that.

That trauma, firsthand, a lot have to do what when he didn't see the Prophet, so I said, I'm experienced that kind of trauma. It was an ability for him to overcome what everybody kind of already felt. Okay, that sadness of actually seeing the prophets I sent a pass away. Yeah, I lost pints. Attica saved him from that. So he was more, I guess you could say composed than the rest of the companions. Well, what was he able to communicate in that composure? And like, when he went up onto the member, the first thing he did is praise the last kind of sad, then he told them

the prayers upon the Prophet peace be upon him, and the first thing that he told to them is diverse in the plot. One man will hammer down a lot of the heroes that Mohammed Salah Masaryk sent a messenger that was sent like messengers before him as a matter of putting a follow up to Milan particle that if he was killed, or he passed away, would you then turn back on your heels from this faith, and if you do, a loss of habitat does not need us and a loss of parents data will

reward those who are constantly in a state of thankfulness? Weren't those the same verses from a hunt? Yes, exactly. Okay. So this is this shows you the Dutch, the physician of how powerful this moment was. That verse was revealed, after the Battle of when people thought the Prophet died. So when the prophet SAW said him actually passes away, and and Abu Bakar, recites these verses, it strikes the hearts of the companions. And if you can imagine, you know, there's emotional triggers in our lives, somebody might touch you and your shoulder, or might say something right back to them. Exactly. Remember when your father passes away or a parent or family member, and you somebody does

this to you, it has an emotional trigger. So essentially, him stating that right was emotionally brought everybody back to the emotional state of God. Exactly. And not only that, but it now adds to the experience of the reality of understanding this verse. In its true reality. The prophets I said now has passed away. So what are the companions do? It was as if a loss handler position abubaker, for him to recite this verse, and the companions said that every single one in the message started to repeat this verse, meaning they lived the Quran. And they said, they walked out of the masjid repeating the verse with tears in their eyes, but they had solace that alone was going to carry this

Deen forward. And they said, when abubaker recited these verses, it was as if we heard these verses for the first time. That was the most powerful moment that abubaker brought, and would kind of have the central theme for the time of his khilafah even though was short, that he was going to bring unity to a nation, you know, on the verge of almost not understanding what the future would bring.

Guys, thank you for tuning in. I see. Thanks for that wonderful explanation, and shallow tuning for some of the other videos that we're gonna be talking about on the same subject of leadership. But exploring that for various themes from the different companions that were leaders during this time.