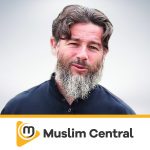 Yusuf Chambers has been involved with a number of leading Muslim organizations; both in the UK and abroad. His work has often focused around community projects and positive civic engagement.

He is a prominent da’ee who delivers lectures around the country. Yusuf has also traveled extensively to give dawah including Mexico, India and Kuwait. He is also a regular on many television channels including Peace TV and Islam Channel.

His work also covered marketing and sales and increasingly he has featured most prominently in media, where he has carved out a niche as one of a new brand of dynamic and professional TV presenters within the community.

Why did I Convert to Islam