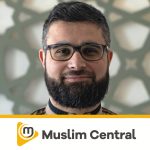 Dr Adnan Rajeh is the Imam and chairman of the Muslim Wellness Network in London ON Canada. He is a founding member and chair of the London Council of Imams. Born in Canada and raised in Madinah and Syria, Dr Adnan obtained a Bachelor of Sharia from the Faculty of Fundamentals of Religion, Omdurman Islamic University in 2011. He is fluent in both Arabic and English, delivering multiple weekly lectures in both languages. He’s served the community in London ON as a preacher and teacher for nearly a decade.

He graduated Medical school from Damascus University in 2012 and completed his medical training in Internal Medicine at the University of Western Ontario in London ON Canada. He is currently completing his fellowship in Medical Oncology.

Dr Adnan Rajeh has numerous ijazahs in Qur’an from the scholarship of Damascus. He was also awarded multiple ijazahs in tafseer, hadith, fiqh, usool,and Arabic grammar from a number of scholars in Syria and Saudi Arabia. He served as a volunteer imam for over a decade in Syria. He is married with three children and resides in London.

End of Life - Between Religion and Medicine