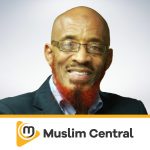 As an American, if I give you my passport, you'll see that I've been to 73 countries. So if technology has binded the whole world together, no one's been outside any longer unless through their mentality, they on the outside. Me I'm not, I'm not an outsider, I'm on the inside, but I think outside the box, you see. So

You see, Mecca is Mecca and Medina is in the east. Jerusalem is in the east, or east of the West. And Muslims would like to feel that somehow, they have some kind of

And so people need to wake up and smell the coffee. You see that when people stepped outside the room and came back, everything changed, everything has changed. And then they need to understand what the world is really about what the dynamics of the world is about where the resources of the world are. And when we just determined that we'll find out rebel must be favorable McGreevy, Allah subhanaw taala. He's the Lord of all directions, and he gives your team and your share he gives to whomever he pleases. And the law has already passed the baton, you know, the word baton. In the race. The baton of dour has been passed to the west.

The baton of defending Islam, intellectually has been passed over to the west. It's not in the East anymore. There's no guys with beards and and goodra and, and a buyer dinner defending Islam anymore. They're defending themselves. In fact, they're not even able to defend their own countries. In most cases, it is France, or Italy, or Germany, or America or Britain who is defending the countries of the Muslims. But being from the west, I don't have to defend Islam. The future belongs to Islam, Al Mustafa only had the deal. The future belongs to this deal. Because this deal is progressive. It is not retrogressive, it is progressive. It is not stagnant. It is moving and active. So I think every

Muslim has to take Islam seriously. And they have to study Islam. They have to know Islam before they start talking about Islam. And they can't simply wear Islam. You know, just because the sister got hijab or a brother hasn't here doesn't mean they know anything about Islam. And what happens is that the press or the media are very smart people. They're very trained people. They don't go to educated Muslims, they don't go to confident Muslims, and ask them questions. They go to the ones that are not confident the ones that are emotional, the ones that are reactionary, and they film that and they record that. And that's what the world sees. So I just think that we we have to know

that the Muslims and Islam we have faced this problem before.

Today, I would say 90% of the information that people get today doesn't come from school. It comes from media.

So Muslims are not involved in media, guess what? Not only are you not in the race, you're not even in the stadium.

If we're not using media, and using it smartly, if we're not making investment into it in a very intense way.

Not only are we not in the game, we're not even in the stadium. So for me, I'm not a media person. I didn't come into Islam knowing media, or corporate background or business. But because by default, I understand that this is what the this is what the game is about. This is what the challenge is about. We have to spend money in order to secure technology. We have to use that technology wisely. And we have to keep up with that technology because it's advancing. So the people who are hating Islam and provoking Muslims and using the tool of info war

Now there are other things and other dynamics that come into it without dealing with politics and, and religion. But I say that

if the source of information that people get concerning Islam is coming principally through media, we should try to, if not dominate, we should try to make sure that we are capable. I have traveled to over 73 countries, and I don't think it's on the rise. I just think that Muslims themselves are being intimidated. And when people are not confident when people are not clear about who they are, and what they represent,

they tend to be they tend to have more paranoia, and they tend to react, or those of us who have a level of confidence about who we are as Muslims, who also understand Islam as it is not associated with culture or misconceptions. We don't react, and we're not intimidated. And so this whole idea of Islamophobia. It is a movement directly. It is a movement. It's a group of people, and they are a small group of people. They are aggressive, they are resourceful.

we battled This is we bring the tools, we use the same tools that using media tools, hmm. And we begin to remove the misconceptions and distortions about Islam and Muslims. And we do it day by day, week by week, year by year step by step.

in the past 47 years of my life as a Muslim, I see that Islam is on the rise, that Islamophobia is under rise, I see that we have more friends and supporters from the non Muslims than we have enemies. It is just that we are who those of us who are in the business of responding. We happen to be a few we happen to be small in number, most of the Muslims because they are insecure, they are paranoid and weak.

They have been reacting. And you know when people react, they're not in their best composure. When people react, you can catch them a camera looking very awkward looking very destabilized. See, they don't like live discussions. They like a discussion that they can go back behind the walls and cut and paste and make it come out to be different than what is intended. So what I would like to just say to yourself, sorry, and other people in the in the media