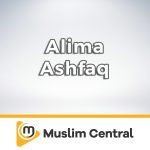 Sister Alima Ashfaq is the founder and director of “I am Alima”, and “Women Of Ilm”. Her aim in life is to assist Muslim women in coming closer to Allah subḥānahu wa ta’āla through Islamic knowledge.

Though sister Alima is currently pursuing Islamic Studies, her thirst for knowledge is never-ending. She has studied under various scholars and students of knowledge in order to gain an extra insight into her religion and to better herself in her role as an “I am Alima” instructor. She envisions to revive Islamic Scholarship among Muslim women in the West and to help portray the correct image of Islam and its beliefs among women. She is currently undertaking an ‘ijazah in the science of tajweed to keep up with her passion for the Qur’an.

Sr. Alima has been a part of various organisations and has also held a number of leadership positions. Besides this, she has also lectured in all the main Universities in the UK, including the University of Birmingham and the Sheffield University.

Sr. Alima also has a flair for writing and has authored Du’as of Superstars, Love Unveiled and Falling in Love. Furthermore, she has compiled and edited the Threads of Hope in conjunction with Sh. Muhammad Alshareef and I am Alima.

An avid blogger with posts on Muslim Matters, Productive Muslim, I am Alima’s own blog and her personal blog, Sr. Alima has also presented a weekly show on Unity FM. She takes a keen interest in personal development and regularly attends seminars in hope of improving herself.

She resides in Sheffield, UK, and currently juggles her time between her husband, baby, Islamic studies, delivering lectures and courses around the UK, and online.