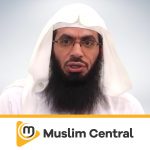 Thereafter, he studied at the Islamic University of Madina as his father did, and graduated with a degree in the Shari’a. He returned to the United States and finished his JD/LLM (masters of law) degree from Michigan law schools. May Allah (azza wajal) reward him and his family. Ameen.

InshaAllah, through this humble effort, we want to bring rightly guided committed beliefs and dedicated practices of Islam in it’s pure form as intended by the Prophet Muhammad (sallallahu alayhi wa sallam), and understood by his companions, and practiced by the followers of the companions, and subsequently by their followers the tabi’een and tabi’ tabi’een back into every aspect of life for all members of the Muslim ummah.

The Comprehensive Fiqh of Fasting 01